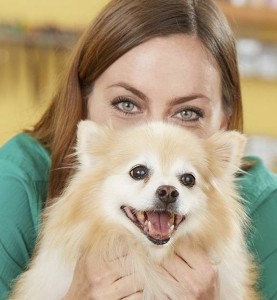 Kendra is a graduate from The Great Lakes Academy of Professional Pet Styling. She ranked in the top 10 in the country for 4 consecutive years on GroomTeam USA and ranked the Number 1 pet stylist in the state of IL for those 4 years. She has placed at every major grooming competition around the country and won multiple Best in Show/Best All Around Groomer awards; her other awards consist of: multiple Creative Styling awards, Artistic Innovation award, she was invited to participate in the Superzoo Jackpot Contest in Las Vegas where she placed 6th out of 20 in a class of 50. She was the recipient of the prestigious Liz Paul Scissoring Award, the Will Stone Memorial Award for kindness to animals.

Kendra was also the first recipient of the Groomie Spirit Award, a nominee for 2009 Cardinal Crystal American Groomer of the Year; the 2011 and 2012 Cardinal Crystal Congeniality Award and 2013 Barkleigh Honors Award for Up and Coming Judge of the Year. She has placed in multiple Rescue Rodeos in Las Vegas and Atlanta. She also enjoys styling rare breeds and was the first competitor to bring the Hungarian Pumi in the grooming contest ring.

Kendra is an International Pet Styling Consultant for the Andis Company teaching seminars, blogging tips for pet stylists and assists in the development of grooming products. She is a published author in Grooming Industry Magazines, teaches seminars and judges grooming competitions worldwide, is published via video through the learn2groomdogs.com website and Andis home grooming tools YouTube videos. She holds certifications through the following organizations: International Judges Association; United Show Managers Alliance; PetTech CPR and First Aid; National Dog Groomers Association of America; International Professional Groomers Association, is an American Kennel Club Safety Certified Groomer and a Certified Canine Esthetician. She served as the secretary and a board member for GroomTeam USA from 2011 to 2014. Kendra has appeared several times as a guest on the radio show called “Ask the Pet Vet” for WTMJ in Milwaukee, WI. and is also a host for Barkleigh Productions’ Groomertv.com, a live Ustream of grooming competitions throughout the USA.

Although Kendra has owned many pets to include Cats, Dogs, Reptiles, Birds, Guinea Pigs and Fish, she is currently owned by a Miniature Poodle named Sprocket. 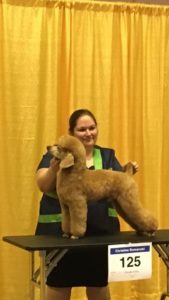 Christine started her career as a bather in 2005 to help pay for college. She ended up loving the industry so much, she wanted to learn more. So she decided to attend The Academy of Dog Grooming Arts and has been hooked ever since. She believes in continuing her education and since graduation, she’s taken online classes from Nash Academy, attended many hands-on workshops and trade show seminars through out the country.

Since 2015, Christine has been competing at grooming shows both locally, around the United States and aspires to be on GroomTeam USA one day. She has won many awards in the regular classes and in Rescue Rodeo where the rescue dogs are available for adoption after the competition. She is certified in Pet 1st Aid and CPR certification through Pet Emergency Education and is working on her certification though the Professional Cat Groomers Association of America.

Outside of grooming, she enjoys doing crafts, going to dog parks, traveling, and has a life goal to visit all 50 states.

Dani has been grooming since 2010. She is very passionate about continuing her education; aspires to compete in grooming competitions; enjoys coloring and has an eye for detail.

She has had a wide variety of pets throughout her life to include Great Danes, Golden Retrievers, a Pitbull Terrier and is currently owned by her Boston Terrier Mix, Rosco and 2 kitties named Carbon and Monoxide.

In her free time she enjoys hiking with her dogs and doing special effects makeup. She is working on her Pet 1st Aid & CPR Certification and additionally holds certifications in Human CPR & as a CNA.